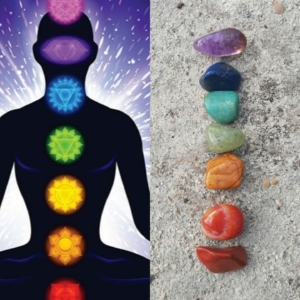 As well as a physical body we also have a subtle body that consists of channels of energy ( also knows as meridians or nadis). When the flow of energy through these channels slows down or gets blocked, we become ill. When the energy flows freely, we live in a state of physical, mental,emotional and spiritual health.

“Chakra” is the Sanskrit word that means “wheel”. Where 2 or more channels of energy cross in the body, a chakra exists. Most Eastern traditions describe 7 major chakras that are positioned along the midline of the body from the base of the spine to the crown of the head. Each chakra corresponds to a part of the body, an organ or a gland. There are also many minor chakras, but the main focus is usually on the seven major ones.

Chakras naturally go in and out of alignment all the time. Healthy chakras are flexible and vibrating. If however, a chakra goes too far out of alignment for too long , that chakra needs to be healed.

Crystals are very useful for the healing and re-alignment of the chakras. You can practice this healing exercise on yourself or someone else, simply by placing the correct crystal on a chakra point while deeply relaxing.

The location of the seven chakras and their corresponding crystals are as follows:

SOLAR PLEXUS:     Behind the soft cartilage at the bottom of the breast bone.

Want to join the discussion?
Feel free to contribute!